We Remember our Friend Mark Leon, a Catalyst for Scholastic Robotics in Hawai’i 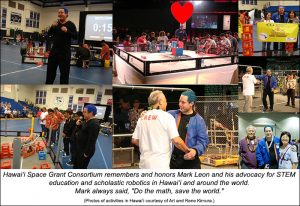 HSGC is mourning the loss of Mark Leon, after learning of his passing in California this week. With his signature salutation, “Do the math, save the world” #DoTheMathSaveTheWorld, Mark was more than an accomplished NASA engineer, he worked to bring scholastic robotics to scores of students, he was a tireless, inspirational STEM advocate, and a true friend.

Mark Leon was instrumental in getting scholastic robotics started in Hawai’i. HSGC Education Specialists, Art and Rene Kimura, share this personal note, “I met Mark Leon by chance 20 years ago in Hilo during the first planning meeting for what is now the ‘Imiloa Astronomy Center; Mark represented NASA as the funding was being passed through NASA. Mark described how students lives had been changed through participating in scholastic robotics. At the time, Hawai’i did not have any scholastic robotics programs. He came with a single FIRST robotics grant valued at $4,000; this grant went to Waialua High School. I begged him for a second grant and two days later he called and offered it to me; this was awarded to McKinley High School. From these initial 2 schools, both acclaimed and award winning teams, and a single program, today, there are 600 teams in nine programs. Mark continued to support Hawai’i, believing that the diversity in Hawai’i could be a catalyst to establishing a world class program. He continued to provided grants to assist our schools and tournaments, invited students to the summer robotics academy as interns at NASA Ames Research Center, came annually to MC one or more of our tournaments, and took the time to visit schools to excite students about engineering and NASA. He is well known nationally as a frequent MC at tournaments around the county…blue hair, blue NASA jacket, tumbling and jumping, energetic, positive and respectful of each person. Thousands of students and teachers in Hawai’i, tens of thousands around the nation, have been energized by meeting Mark Leon. Mark always said “do the math, save the world.” He retired from NASA, moved to Colombia with his wife, Monica Sanchez, supported the growth of robotics in Colombia and Ecuador. He called us every couple months, saying he was “checking in,” and confirming that there is life on Mars, continuing to support Hawai’i and our growing robotics programs. We will truly miss an extraordinary person and friend. He lived life fully and with so much loving kindness. Where would Hawai’i be in scholastic robotics if not for Mark’s initial and on going support? He had planned to bring teams to Honolulu this summer for a new invitational program. Aloha Mark, we know your light continues to shine over all of us.”

NASA Space Grant Consortia are in alliance with the NASA Robotics Alliance Project.