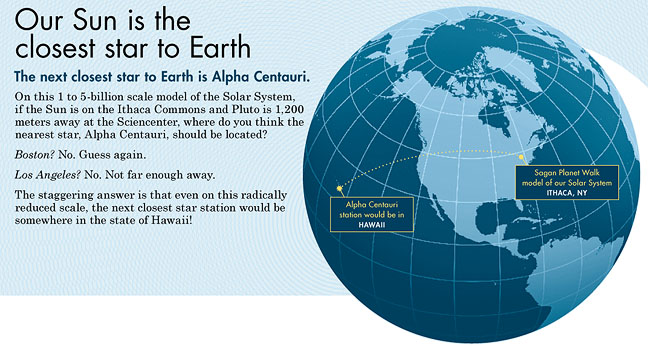 The Sagan Planet Walk is a model of our Solar System built at a 1 to 5 billion scale, originally dedicated in 1997. Starting with the Sun on the Commons in downtown Ithaca, New York, this walking tour leads to the Sciencenter, a hands-on museum with over 250 exhibits. Both the size of the planets and the distance between them are accurately scaled and displayed. It is the largest exhibition in the world now that it expands from Ithaca to Hilo to include the star nearest to the Sun, Alpha Centauri. This new star station representing Alpha Centauri (Kamailehope, pronounced kah-my-lei-ho-pey) is located on the Big Island at the ‘Imiloa Astronomy Center of the University of Hawai‘i. It is a prominent star known in Polynesian Astronomy and used in oceanic voyaging. The newly expanded Sagan Planet Walk measures 5,000 miles (8,000 kilometers). The Walk is named in honor and memory of Cornell University astronomer, Carl Sagan, a respected space scientist, an inspired and tireless advocate for science, a valued advisor to the Ithaca Sciencenter, and member of the Ithaca community for nearly 30 years. The Alpha Centauri (Kamailehope) sculpture by Hawaiian artist Rocky Jensen has been a two year project, a partnership of the Sciencenter, ‘Imiloa Astronomy Center, Cornell University, University of Hawai‘i, and NASA. Lead funding was provided by the New York Space Grant Consortium (based at Cornell) and Hawai‘i Space Grant Consortium (based at the University of Hawai‘i at Manoa), with additional major funding provided by ‘Imiloa and the Sciencenter. Read more about the unveiling of the sculpture and the artist from the ‘Imiloa blog. Find out more about the Sagan Planet Walk from the Sciencenter, including a free downloadable audio tour and Passport to the Solar System booklet. HSGC’s Art Kimura, Rene Kimura, and Linda Martel attended the unveiling of the Kamailehope sculpture. Martel obtained ‘Imiloa stamps in a Passport to the Solar System booklet, making her the first Hawai‘i resident to visit every station in the exhibit. Martel walked the Sagan Planet Walk in Ithaca in October, 2008 with Jeff Taylor (Space Grant Assoc. Director for Space Sciences) and his family when Taylor was the recipient of the 2008 Carl Sagan Medal for Excellence in Public Communication in Planetary Science awarded by the Division for Planetary Sciences of the American Astronomical Society at their 40th annual meeting, which was held at Cornell University. Pictured below, left to right: Charles Trautmann (Executive Director of the Sciencenter), Linda Martel (holding a Passport to the Solar System booklet), Rene Kimura, and Art Kimura standing in front of Kamailehope star station. See more photos (pdf) courtesy of Art Kimura.