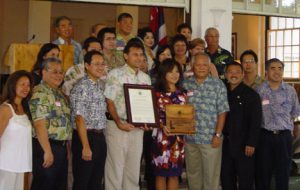 Today the Hawaiian Electric Company (HECO) was recognized as one of twelve outstanding advocates for children and youth, an honor presented by the State of Hawaii. Nominated by HSGC’s Art Kimura, HECO was instrumental in helping to establish the Astronaut Lacy Veach Day of Discovery nine years ago, an event they continue to co-sponsor annually with corporate donations, interactive displays, and hands-on workshops. Working with Art, HECO also helped initiate the Hawaii Botball Robotics program, which in seven years has grown to become the second largest event in the world among all the tournaments. Photograph courtesy of HECO. Visit the Hawaii House Blog for more details on the award. Congratulations!