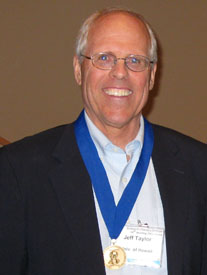 The Division for Planetary Sciences (DPS) of the American Astronomical Society has honored Jeff Taylor with the 2008 Carl Sagan Medal for excellence in public communication of planetary science. Jeff received the medal October 12th in Ithaca, New York during the 40th annual DPS meeting. Jeff is the former Director of Hawaii Space Grant Consortium and now serves as Associate Director for Space Science. Read more about it in the Honolulu Star Bulletin. Also see the online science journal Planetary Science Research Discoveries, featured in the award announcement. Congratulations!

If you need to reach us, we prefer you contact:  hsgc@spacegrant.hawaii.edu

“The material contained in this document is based upon work supported by a National Aeronautics and Space Administration (NASA) grant or cooperative agreement. Any opinions, findings, conclusions or recommendations expressed in this material are those of the author and do not necessarily reflect the views of NASA.”