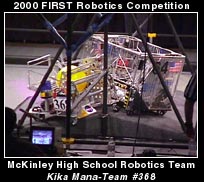 The team brought home the silver medal and was honored as the most photogenic robot/team and the team that traveled the farthest. The McKinley High students received expert help and encouragement from advisors: Mr. Milton Lau and Mr. Henry “Hank” Kusunoki and a team of engineers, machinists, and technicians from the Hawaiian Electric Company, Dept. of the Navy-SPAWAR, 3M Hawaii, and the University of Hawaii. Hawaii Space Grant is proud of the team’s accomplishments and proud to be one of their sponsors. [McKinley FIRST robotics team]

The FIRST Robotics Competition is a national engineering contest for high school students. Teaming up with engineers from businesses and universities, students get a hands-on, inside look at the engineering profession. In six intense weeks, students and engineers work together to brainstorm, design, construct and test their “champion robot.” Teams then compete in spirited, no-holds-barred tournaments complete with referees, cheerleaders and time clocks. Partnerships developed between schools, businesses, and universities provide an exchange of resources and talent, highlighting mutual needs, building cooperation, and exposing students to new career choices in engineering, math, and science.
[FIRST Robotics Competition Information]

If you need to reach us, we prefer you contact:  hsgc@spacegrant.hawaii.edu

“The material contained in this document is based upon work supported by a National Aeronautics and Space Administration (NASA) grant or cooperative agreement. Any opinions, findings, conclusions or recommendations expressed in this material are those of the author and do not necessarily reflect the views of NASA.”